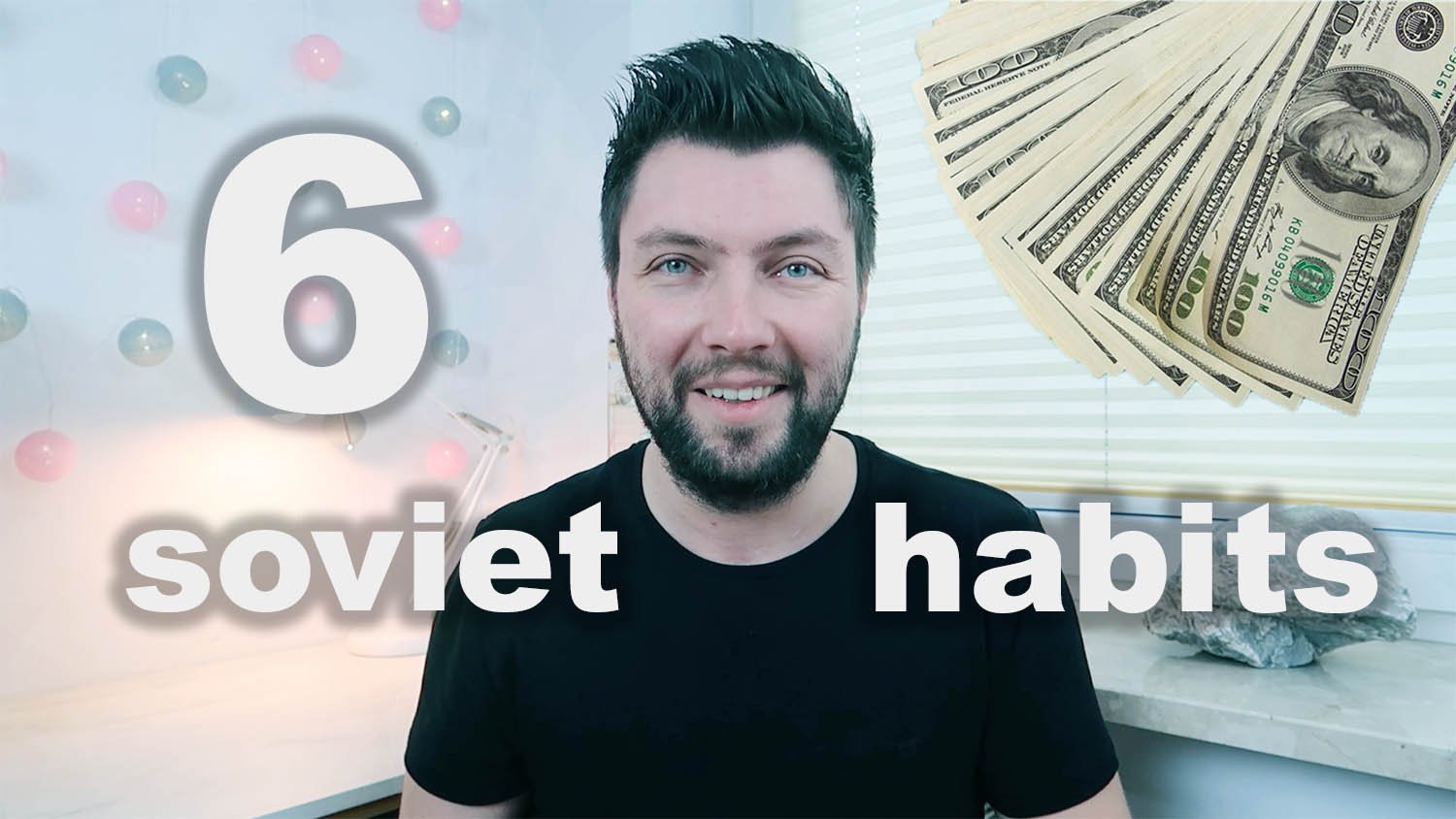 Hi! My name is Dmitriy, I was born in 1981 in Soviet Union and grown up in a very soviet culture. I took me a lot of time and efforts to change from the old soviet way of thinking to where I am now. And still from time to time I find some signs of soviet culture in my head, in the way I plan my life, manage my finances, in my approach to what I buy, what I wear, what I eat.

Here are 6 main habits from Soviet times which I had to overcome, because they are just not relevant today and even more – not healthy. They are totally opposite to the idea of Minimalism. Some of them can make people live miserable lives even when they have enough resources to live a good life.

1. Eating everything with bread

First soviet habit – Eating everything with bread (because without bread you will not get full). This habit is quite strange. Probably it has it’s roots in the times when we didn’t have so many kinds of food available in the shop, and the bread was quite cheap. So whenever and whatever you eat – you also eat some bread to get full. Even if you eat pasta. This doesn’t make any sense now, because bread is not cheaper then other food. But still somewhere in my head I kept thinking that bread is the main food which I need to eat everyday.

I am trying to eat less bread now, because if I eat a bit more I start to gain weight.

2. You must finish everything that is on your plate

Second soviet habit – You must finish everything that is on your plate, because you cannot throw away the food. During the soviet times if you throw away the food it was a sign of disrespect, it means you do not value the hard work of those people who produced this food, who raised this wheat or worked hard on the farm. Especially with the bread – the bread was almost holy. After every meal my grandfather was collecting all bread crumbs from the table and ate them, so none of them goes to trash.

In that old way of thinking if you put something to your plate – you must finish it even if you overeat and feel sick after. Because the food was in a sense more important than you or me.

Or you need to put it to the freezer to finish it tomorrow. But the reality is that tomorrow this food is not attractive enough, so you keep it there in the freezer for another day or two or three until it is covered with mold, and then you have the moral right to throw it away 🙂 Do you do the same?

Of course I understand and value the hard work of other people, I also understand that there are many people in the world who lack the food. But I still think it is better to throw away what I don’t want to eat or what will make me feel sick. And it’s always good to be conscious about the amount of food I put to my plate.

Third soviet habit – to collect and keep plastic bags. And not only those big strong bags, but also these small regular ones that we use for fruits or vegetables. During the soviet times we didn’t have free plastic bags in the supermarkets, so people kept them and used multiple times. Firstly you wash them with soap, then you hang them to dry. I remember myself doing it when I was 10 years old.

Even now, when these bags are available for free in every supermarket, many people still keep plastic shopping bags in one big strong plastic bag at home.

On the other hand this habit might be very useful now, when the world is alarming about the ecology status. Decomposition of plastic shopping bags is estimated between 500 and 1000 years – no one can tell exactly, but it takes very very long. And it is definitely good to use less of them.

So this is not an old soviet habit anymore, it can be a super cool eco-habit.

Fourth soviet habit – keeping old broken staff, hoping to fix it one day. I will get rid of this habit right now when recording this video for you. Firstly, I will show you my own box with old broken staff which I hoped to fix or use one day. I didn’t touch this box for more then a year now, so I can assume I just don’t need those things. I will throw them away right now, and you gonna witness… (watch the video he he)

5. Keeping old clothes and wearing them at home

Fifth soviet habit – keeping old clothes and wearing them at home. There were times when I couldn’t afford buying new clothes, so I wore what I had – that’s totally fine, there might be different seasons in life. But the problem is when you have money to buy new clothes, you have new clothes, but you don’t wear them, you keep them for the better days, and you wear shabby worn clothes at home.

With each year your wardrobe gets more and more full, and most of the things are very old.

6. Keeping good expensive cups and plates in the shelf, but never using them

Sixth soviet habit – Keeping good expensive cups and plates in the shelf, but never using them. Almost every family in the Soviet Union had a special dresser for good expensive dishes. You keep those things for a very special occasion which will never happen, because no occasion will be special enough to take those expensive things from the shelf. You keep those dishes like a treasure, you are happy that you have it, but you never ever use it. Instead you are using old broken cups and plates. Because you know, why using those good new cups?? It’s to risky, because you can break it.

The paradox about these habits is that you own good expensive things, but 99% of your time you are using old things, you are surrounded by shabby worn broken staff, as if you were poor.

These were my six soviet habits that I had to overcome when changing my way of thinking. Every year I do a clean up and test my self if anything is still left. I wonder if you guys in other countries have similar experience, I would be grateful if you could write me a comment and mention your country and if you have any of these habits too. Or maybe you have different ones. Please let me know in the comments, subscribe to my channel and see you soon in the next video. Bye!